The State of the 2A in Florida in 2020. GOP BACKED UBC BILL IN PLAY

Anything and Everything dealing with Political issues.
Post Reply
26 posts

Once again, I see politicians expanding the bureaucratic machine and committing taxpayer money to no effective net positive result, while making criminals out of more citizens who are peacefully engaged in transacting business concerning private property, all while making Floridians less safe under the pretense of making us more safe.
The Sunshine State has turned a bit more blue than purple...and the state legislature is leading the way, one bill at a time.
Top

Marion Hammer, how much is she hindering or helping?
Top

Holy shit that is some Stalinist crap.

When does this potentially become law?
"The essential American soul is hard, isolate, stoic, and a killer. It has never yet melted."
Top

Rep. Sabatini, elected in 2018 and part of the Liberty Caucus, has introduced legislation to allow for firearm carry on public university campuses, as well as "constitutional carry," the ability to open carry without a permit that presently exists in some form in about a dozen states.

"There is no gun law, no gun regulation that squares with the Second Amendment, other than constitutional carry itself. Period," Sabatini said to cheers.

Mr. Bartlett said that Republican legislators as well as Democrats pushing for gun control "need to do is back down before we start boiling some tar and cut up some pillows, if you know what I mean." 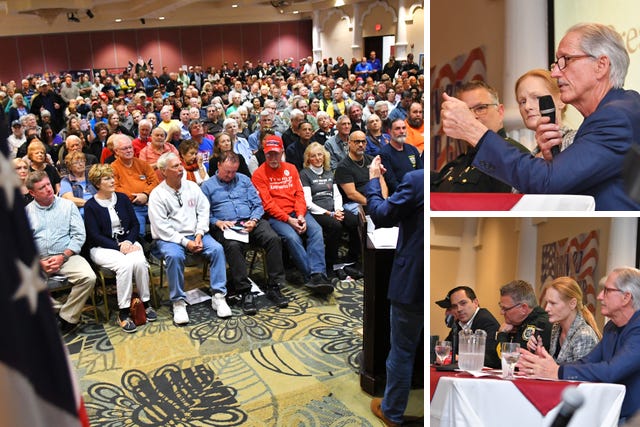 Describing himself as the most pro Second Amendment sheriff in the country to cheers and applause, Sheriff Ivey said the amendment is the "military of the constitution," before stating that the country is under attack. "Let there be no doubt about it: what we cherish in this country is under attack, and I am telling you that from the bottom of my heart. I believe it is not only our Second Amendment that's under attack I believe our entire constitution is under attack, and we have to stop being the silent majority, and start being the vocal majority," he said to applause.

Sheriff Ivey previously had endorsed some of the same politicians that were criticized for their Second Amendment voting records that night.

Also present as an attendee was Democratic congressional candidate Jim Kennedy, who noted that he is a gun owner and a veteran, and that the "Second Amendments is the Second Amendment of the Constitution for a reason, and there are responsibilities that go with that."

Kennedy said "I'm here to learn, and I'm here to see what people are interested in."


Much ire was leveled against Democratic control of the legislature and governor's office in Virginia, where a raft of gun control legislation has been proposed sparking a bevy of cities and counties to declare themselves "Second Amendment sanctuaries" and where sheriffs have threatened to refuse to enforce such laws.

"What's going on in Virginia is absolutely crazy," said Ivey, who sidestepped a question about whether he, too, would refuse to enforce additional gun control laws in Florida, saying the focus should be on preventing such laws from being passed. "If we don't succeed there, we'll be standing ready, the sheriff's office is the first line of defense for our citizens," he said, reminding the crowd that the Constitution is tattooed on his arm.

Rep. Sabatini message to gun advocates was to fight for control of the narrative. "The air in the room (in Tallahassee) is on the side of gun control right now and I would say that should be the focus," he said.


I was honored to serve as a panelist for the Brevard County Gun Rights Preservation Forum on Monday evening that was held at the Space Coast Convention Center in Cocoa.

Centered around anti-gun rights events that are taking place around the country, the forum that was attended by hundreds was designed to facilitate an open discussion about the importance of the Second Amendment and the protection of our United States Constitution.


I would like to personally thank Bob White for hosting the event and all of the hundreds of people who attended the forum to show strength in unity for our 2nd Amendment and our United States Constitution!

When does this potentially become law?

When does this potentially become law?

And, if it makes it through all that, then of course to the governor.
Top

These guys will get on their knees for whoever's will right that check.

As a Republican HE should be ashamed of himself

Spoke with my contact within the RPoFL. The party has reformed the 2nd Amendment Action Committee and my contact is now running it. The Committee reached out to House Speaker Oliva and Gov. DeSantis. Neither back this.
Top
Post Reply
26 posts