Anything and Everything dealing with Political issues.
Post Reply
32 posts

Well, I'll tell you, ratface. I don't own an AR. If you want to come and root around my house, yourself rather than some poor sucker, I can show you that a size 13W can cause quite a bit of pain. That's step 1 of the escalation list.
It is, it is a glorious thing to be a pirate king.
Top

In The words of Briscoe Cain “My AR is ready for you,Robert Frances” and “you’re a child,Robert Francis”.
Top

We have all now seen the enemy and the hand their playing. We need to stop all the infighting over the NRA and Trump and unify to stamp this out. Anything else and we will lose

I do agree this is step one in escalation. Respond accordingly. Don’t be stupid, be smarter than the enemy. Don’t do anything irrational. Don’t threaten anyone online we all know what will happen if they try no need to say it. Stock up while keeping a low profile. Red flag laws are coming and they will use what we post online against us if we’re not careful
There are plenty of classes out there now. Train and train some more
1st Battalion/5th Marines

CaptBarty wrote: ↑
Fri Sep 13, 2019 2:58 pm
Maybe Beto is short for Roberto? I don't know any Spanish other than the most important word (Cerveza), so it could mean "rat face" for all I know.

“Beto” is short for ASSHOLE!
Top 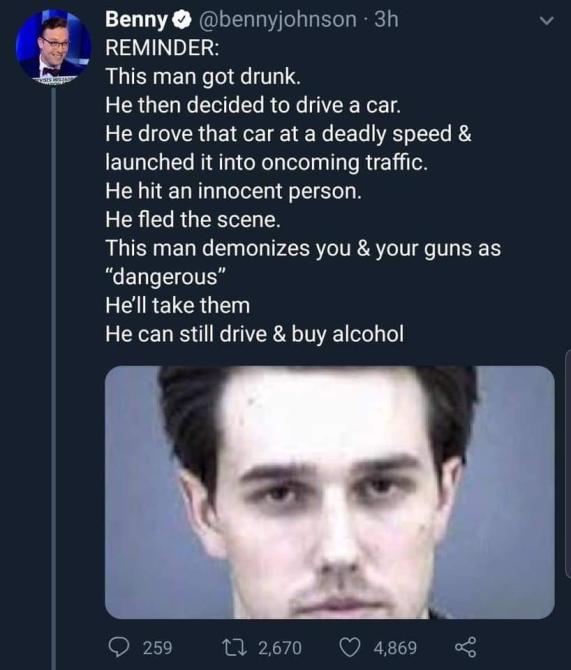 "The essential American soul is hard, isolate, stoic, and a killer. It has never yet melted."
Top

Ok, how is this guy seriously a candidate?

Hace you read his poem were he fantasizes about running over kids on purpose?

Captain Steinbrenner wrote: ↑
Sat Sep 14, 2019 11:09 pm
Hace you read his poem were he fantasizes about running over kids on purpose?


Sent from my iPhone using Tapatalk

No but why am I not surprised. Seriously, most gun banners are gun banners because they are actually crazy and if THEY had a gun they probably would run around shooting everyone who disagreed with them and they honestly believe everyone thinks and acts like that.

So when I ask them "So the only thing keeping you from killing people who aren't actually a threat to you is because you don't own a gun" and I swear to god the answer is "Yes" and usually followed by the suggestion that I'm no different and it's just a matter of time before I do the same thing.

Never mind that I've never killed anyone simply because they disagree with me about something or I happen to be "angry at that moment", swear to god the amount of ammo needed would be staggering. But the scary, scary shit is them trying to get me to admit that I'd actually kill somebody if I was mad enough because "people get emotional and don't think about what they are doing." I guess I'm glad that most of them are too stupid to realize they could run people over with a car almost as easily.

Which ironically enough brings us back to Bepo. So how is he not in jail? How on earth is he actually a candidate for president? Why isn't everyone talking about this?
Top

F'ing God how did this guy pass a psych eval?

How the blue F is he a member of the House?
Top
Post Reply
32 posts