About to be getting started on a real goofball of a HK type project. Should be all setup to run Thompson SMG magazines, and retain its delayed roller blockback system.

Torn between going as a pistol with a brace, or leaving it 16" and using whatever I want in the back. Not sure yet.

Since this carrier is pretty hammered I'm going to have to shorten it either way, so the carrier, cocking tube & support and recoil system are all going to need to be shortened. I figure If I have to do all that, I might as well take off the 3/4" or so of the rear of the receiver, and make it a "single pin" MP5 / HK93 length in the rear.

I gotta see how it will measure out. The carrier is only about 3/8 shorter than standard as it sits (hammered nose). I "might" be able to use a HK33 length tube and keep it a carbine, but right now I'm thinking about shortening it all the way to 8' or so....MP5 length. 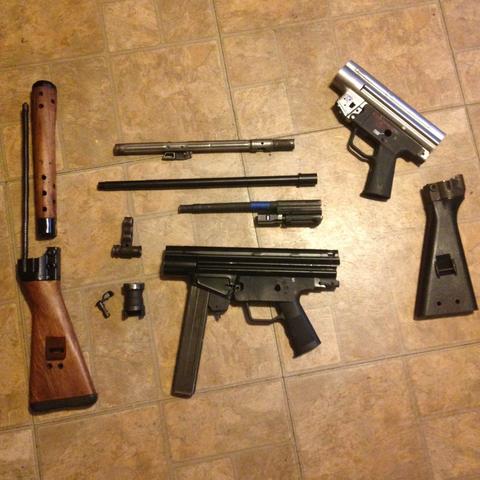 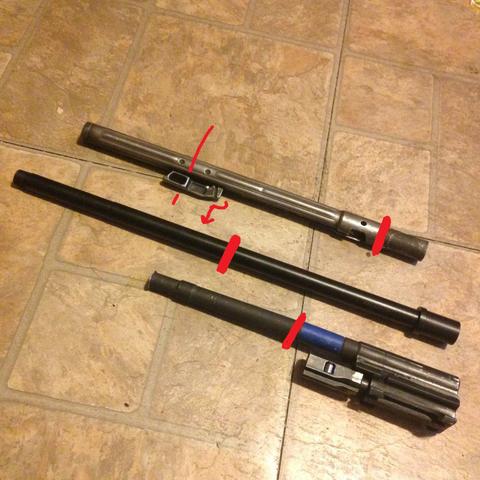 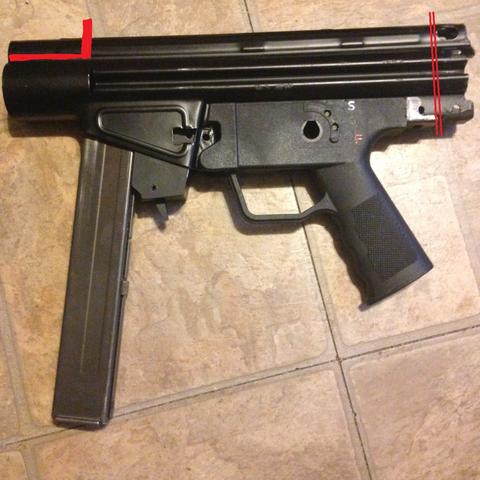 Depending on how everything measures out, it will be either MP5 or HK33 length. I just need an standard MP5 handguard so I can see where the hanger would need to line up and if I can cut & blend a CETME tube to make that work. Pretty sure I'm going to have to cut back into the receiver, "K" style either way.
Last edited by NorincoKid on Fri Aug 30, 2019 12:29 pm, edited 1 time in total.
Top

After mocking stuff up, and trying to do the math on what/where to shorten stuff I ran into a problem. And now I see how the HK51 does it.

I'd need to make some kind of collapsing/telescopic recoil assembly for it to work right. Shortening the carrier was fine, but the recoil has to rest in its "pocket" to keep pressure on the carrier when in battery. Shortening the rod would make it very sloppy up there. And with a shortened carrier & cocking support, the cocking handle would "hit" the end of the recoil rod, not allowing it to be cocked all the way back.

HKParts has a telescoping recoil assembly/back plate for this very application, but its nearly $200. Thats almost what I have into this whole project so, whatever, carbine it is.

I added some metal and reshaped the carrier so it seems to be proper length now.

The top part (and many other parts) of the receiver I got was quite wonky. I had to , sadly, remove most of the precious "sleeve" on the cocking tube for it to sit where I wanted it to. 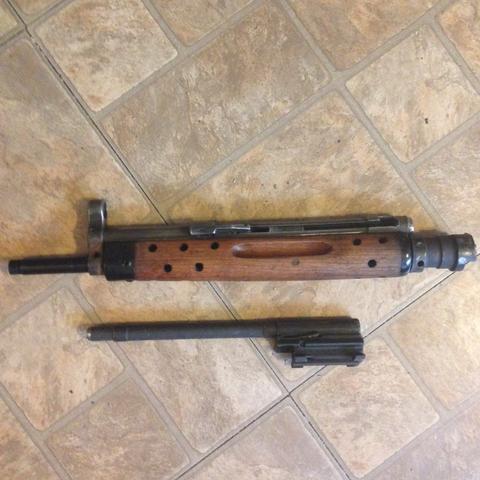 I cut the CETME front sight assembly too. Removed the bipod retainer ring, and the "sleeve" part that runs rearward to help lock the handguard. I did however leave the "centering notch" in place, so at least the handgaurd wont want to try to rotate.

It had to be opened up a little bit to fit this fatter .45ACP barrel.

Pressing the barrel into the trunnion didn't go very well either. It was tight. I mic'd it, I though it had a reasonable press fit, but not I'm thinking that the CETME trunnion wasn't perfectly round. Should have checked it in more than place. But whatever, It went in.

During the battle though, I did manage to disturb the threads on the muzzle end though. I didn't realize how thin it was there. It's threaded 578x28 , I'll probably have to chase them.

Considering maybe getting a 578-28 to HK Three-Lug adapter for it, or just putting a birdcage FH on it.
Top

Casual wrote: ↑
Fri Aug 02, 2019 9:47 am
Contact Ralph @ RDTS and talk to him about their special floating recoil assembly

I'll look into it, thanks!

I was thinking it over last night, and since it really doesn't need the "camming" force of the cocking support as a .45 , I think I could just put a cocking knob right onto the end of the carrier.

I would lose that HK non-reciprocating charging handle setup and lose the twist-BHO but it would let me use the original recoil assembly as it.
Top
Post Reply
4 posts • Page 1 of 1