if you have been really into guns for any length of time, you should be able to identify the new guys, 1st time buyers, old funds, RO wannabes, or anyone you could fit into a catagory of your choosing.

How would you classify these people and when and where their gun knowledge came from.

Guy pulls out an FNC, pre89 Galil, and SP1. And talks about shotgun news as God's own words....

Baby boomers are easy to identify... they tend to shoot something that starts with 1911 and is chambered in .45 AARP.
Older boomers who don't trust semi-autos will whip out a S&W in .357 and tell you how it's more powerful than any semi auto round.

Millenials and zoomers get their knowledge from video games and you can tell which ones by the weapons they know: 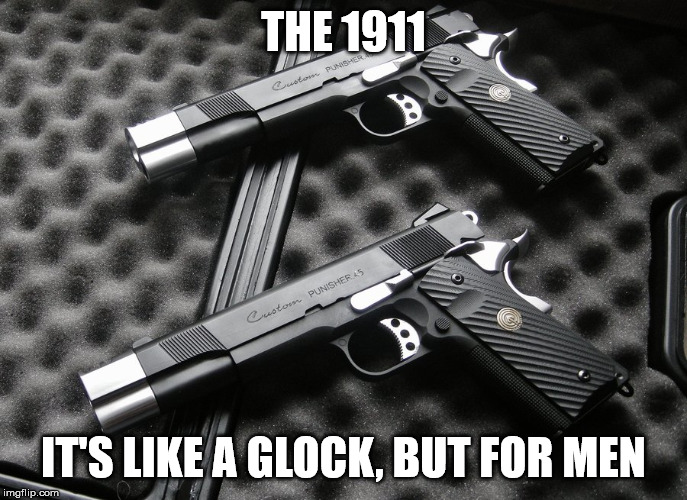 Guy pulls out a Hi Point and says "I can't hit shit with this thing!"

It happened at my home range. I didn't bother telling him to adjust the rear sight. SMH
The shooter formerly called #1Glock30
Top

Guy shows up with his dad thats a fellow club member I did not know but he had the club I.D. badge, takes an American Indian style blanket rifle cover/bag out of dad's SUV.

Brings that over to the 100 yard bench area along with a milk crate sized blue tuperware container.

We setup targets and return to the bench area.
Myself being the RO as I'm the first one at the range call " Range Hot ".
The "Guy/son" pulls out a well crafted hand built .50 caliber flintlock Pennsylvania longrifle.
He proceeds to run a dry patch down the barrel, wipe down the cock, frizzen and checks the flint for tightness and then clears the touch hole.
He proceeds to load like an "old guy" that knows and has done it for years ( like me as I've shot BP forever and I'm a bit older than his dad) powder horn, patch and ball, starter etc. and shoots. His dad has a .22 scoped rifle, I was shooting my M14 prior to them showing up but now just sat and watched the kid.

After a short time they asked to check and change targets.
"RANGE COLD".

The kid was 26 years old, his dad was late 40s.
I asked him a bunch of questions like " You're the first young man I've seen in years shooting a rock lock. When did you get into it ?"

He explained his interest in U.S. history since he was a little boy, especially the Rev War era. He liked many firearms but preferred military weapons used by the U.S. in all of the the wars we fought.

There's still hope for this country as long as there are some young people still interested in what and why we're a free society compared to the rest of the world.

As far as a nametag like millennial or whatever his age group is called, to me he is a good , young American patriot who was raised to love and be proud of his heritage and country.

When my son was born I made a list of guns I wanted to collect to leave for him and started acquiring them...something that I had always wished my father had done for me. Since my primary interest were in handguns my list consisted mostly of interesting handguns which I expect he would not be able to afford in 20+ years...H&K P7M8, Styr GB, Colt Python, Colt Diamondback, Dick Special, Cobra, Agent, Series 70 1911A1, Colt Commander LW, Browning Hi-power, Ruger Bearcat, Glock 17L, Never shot in case S&W model 66, Seacamp 32, etc. about 20 in all plus my S&W M&P/model 10 revolver collection and couple rifles.
I started taking him to local ranges since he was 5/y/o so he's been shooting for almost 9 years. He gets to shoot all the latest cool stuff, suppressed guns, full-auto guns and even got to shoot belt fed MG. I could only dream about all that kind of stuff when I was growing up but my son is different...he isn't into guns. Only gun he likes to shoot is the Henry 22 lever gun, a AR carbine and a AR pistol I assembled for him for hunting, a Marlin youth single shot 22 bolt gun and the Ruger Mk3 auto. He's not interested in anything else. It took me long time to accept the fact that he's not a gun guy and he will never be a gun guy. Instead of guns he's big into playing electric guitar and he's really good at it. He'll practice for hours in his room playing classic rock and blues. He listens to old blues and rock music for hours trying to understand the music. He's passion for music is as great as my passion for guns at his age.
I'm a little disappointed that he's not into guns but I'm glad he has the passion for music in his life as I believe everybody should have passion about something in their life.
Top

Rug,
I stated my son out around 8 or 9 years old IIRC. I bought him a Savage bolt action .17 cal HMR. He began shooting nickle sized groups with that, I then bought him an M4. At an early age he could field strip his M4 as good as any Marine could.

He competed in many rifle shoots at our club and won a quite a few beating grown men of all ages including myself, I was so proud of him.
The club set him up with a group to tryout and compete to be on the Jr. Olympic shooting team. That didn't interest him, too much time involved, he wanted to have fun shooting not make it work. During this time right before middle school I taught him drumming rudiments and how to read drum charts/music. I had been a professional drummer about 13 years of my life and played since 1965 as a young boy.
Anyways he took to the drumming like a natural, like his dad. Drumming was always easy for me and was for him too. Not bragging but I had a drumming style very influenced by John Bonham and double bass master Tommy Aldrige of Pat Travers and Ozzy fame. I was pretty decent drummer but he took my doublebass drumming skillset to the next level, it amazed me and guys I'd played with. Talk about "It's in the genes", He was the only drummer they picked up from middle school everyday to play in the high school band. They nicknamed him "The Prodigy". He's a kickass drummer to say the least.
He played in a rock band that won the talent show in high school and then went to college. During his growing up even though he and his sister went to public schools I home schooled them in American military history, the Constitution, Declaration of Independence and the Bill of Rights, things they said were rarely mentioned let alone discussed at school. I also told them about their proud heritage of their great grandfather, grandpa and myself serving our country. They are both very Patriotic to say the least.
He got his Bachelors in Computer Science and is now an IT manager at a large financial institution. He plays drums now and then but he's started to amass a collection of nice handguns and he's taken some private training with a friend from a former SEAL in their use mostly for quick target accusition and rapid accurate fire. He's meticulous in their maintenance just like ole dad taught him and he's one hell of a shot with both handguns and rifles. His safety regimen is without comparison.
My dad left a couple of old guns but I've made sure my son will have a collection of weapons he'll be proud to pass on to his son one day.
He's still a bit standoffish towards flintlocks and such.
He'll come around some day on those too..

I had most of this posted here before the forum took a dump, pics too.
ROLL TIDE !
Top
Post Reply
8 posts • Page 1 of 1