Two years ago I wouldn't have paid it any mind. I'd have bought a case of beer and some vienna sausages and pretty much ignored it.

Then Irma left me without power for 9 days.

Now I'll get a case of beer, two cases of vienna sausages and gas up the generator (that I bought two days after Irma came through), and cast a wary eye.
Top 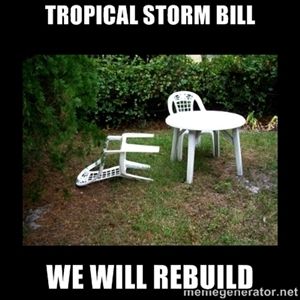 Yeah, even if the forecast is for it to be a minimal hurricane in 3 days and back down to depression soon after... It's in the wrong place to simply ignore it.
Top

Have to get the generator fired up,then if I do need to hook-up an haul ass,at least I'll know thats working.
Never pick a fight with an ol' man,he'll just kill ya .....
Top

The fact that there is one out there is an excellent remnder to fill up the gas cans and check the generator. (Ran it less than 6 months ago) Better safe than sorry.
Top

I am counting on Haiti taking another one for the team.
Top

Can't wait to send them more money to get embezzled.
"The essential American soul is hard, isolate, stoic, and a killer. It has never yet melted."
Top


LOL. Any real storm and that's just a speedbump. Plenty of time and warm water to power it back up to a major storm between there and here. The only thing that really matters is if it goes over Cuba or not and even that is no guarantee of anything.

IRMA was my last storm. Told my wife we were leaving after work Thurs., her job wanted her to work all day Fri but hey, F them.I thought I'd be done prepping the house and loading the car by 5pm, that didn't actually happen until 2am.

By 9am Fri we were in the great turnpike evacuation parking lot. Glad we didn't try and leave Fri after 5pm, we'd have never made it. What should have been a 4 hour drive took 13 hours. More than a few times we worried we might not have enough gas to get to the next station even though it was only 15 miles away. Saw lots of "out of gas" cars on the side of the road.

That was my "never again" moment.

Had one storm teach me to never try and ride out a Cat 4 or 5 storm, Irma taught me that as soon as a serious storm becomes "likely" to land in your zip code evacuations are as challenging as riding out a major storm.

Having done the aftermath of lesser storms and 3 weeks without power or regular access to gas, the whole thing is bullshit and no way to live 6 months out of the year. In 2018 I cheerfully ran a snow blower 3 to 4 times a week for several months just to clear out my driveway.

Sometimes when I was done, I sat outside and just watched kids make snowmen. It was actually peaceful and less aggravating than trying to mow the lawn in Florida summers. Between the sauna weather conditions, giant roaches and spiders and the fact that 80% of the state is addicted to heroin the only thing I miss is decent pizza.
Top

The mountains of Haiti have proven a problem for many storms. Cuba is usually not a player in the major hurricanes that come here--they pass north of Cuba and come straight though the Bahamas.

1979's David is famous example of a storm drastically reduced in intensity by interaction with Haiti, fortunately for us.
Top

The Labor Day 1935 hurricane, no one thinks that will ever happen to Florida again.
Top
Post Reply
125 posts