Pistols of all descriptions.
Post Reply
5 posts • Page 1 of 1

First shots with the new G3. Physically the G3, with the 15-round mag, is about the same size as my Glock 19.5FS. Assuming the G3 is weighed with an empty mag it's about 1.5 ounces heavier than the G19FS. As much as I like my G19FS I like the grip angle of the G3 a bit better. Texturing is aggressive but not too aggressive. It feels less aggressive than either of the G2 models I've owned.

Accuracy was fine. I had one hiccup with WWB 147gr JHP feeding. This could be because the pistol was new, or maybe it doesn't like this particular ammo. To be fair, I've had issues in other makes of pistols with WWB 147gr JHP. Other than the one hiccup the rest of the box ran just fine, even under rapid fire. All other rounds ran fine. I'm planning on a return trip to the range on Monday to check the sights on my HK USPc after I moved them a hair. I plan to shoot another box or two of the WWB 147gr JHP to determine if the gun doesn't like that ammo or if it was just a break-in hiccup. I also want to shoot some standard pressure 115 JHP's as well and see how it does with them.

The mag release is functional but small. I prefer the one on the Gen 4 and 5 Glocks as it's a bit larger. Not terrible, just not as large. Uses the very excellent Mec-Gar magazines.

Sights are smallish and I can see changing them out for a set of inexpensive Glock night sights. That's a nice perk that the G3 uses Glock sights. Mags loaded up full without issue. Safety engaged properly like it should and even under rapid fire drills the thumb safety never accidentally engaged. The trigger, imo, is better than any of the G2's I've owned. The wide dingus felt good, never pinching the finger. The take up was fine until the wall and then had a crisp break. The reset was short, very similar to Glock. If I were blind folded and you me switched back and forth between a G3 and a Glock 19 I would be able to tell the difference from the feel of the trigger but not in a negative way towards either. Simply because of the wider dingus. Reset was very similar and provided the same quick and accurate follow up shots. I'd like to see how it smooths out as I put more rounds through it. For $259 I'd say it's a win.

I had my second range session with the G3 on Monday. I shot some more WWB 147g JHP. Between the two range days I shot 100 rounds of this type ammo and had two FTF. As I mentioned above, I've had issues with this ammo before in other pistols over the years. So I can't say definitively that it was solely the fault of the Taurus. Others have noted in the past that the OAL of WWB 147 has a random difference here and there. So was it a couple of rounds out of a hundred with a longer OAL? I don't know. I can say the other 98 rounds were boringly reliable and accuracy was more than adequate.

No hiccups with 124+P Gold Dots or Remington UMC 115 JHP. And of course all the ball ammo ran smooth.

I detail stripped it down after the second session. Dirty but nothing unexpected was found. I did note that the lug the RSA fits into was very beefy. A lot longer than say a comparable Glock. 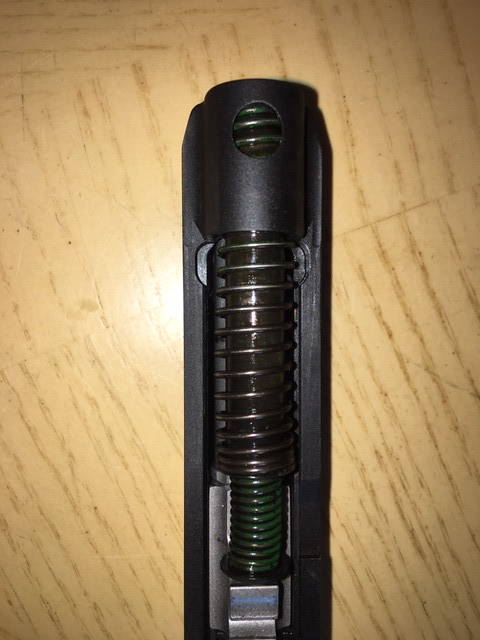 Taurus G3 with grey frame and 17-round mag. The mag release is smallish, similar to earlier models on Glock. A bigger one would be nice, similar to the Gen4/5 of Glock. 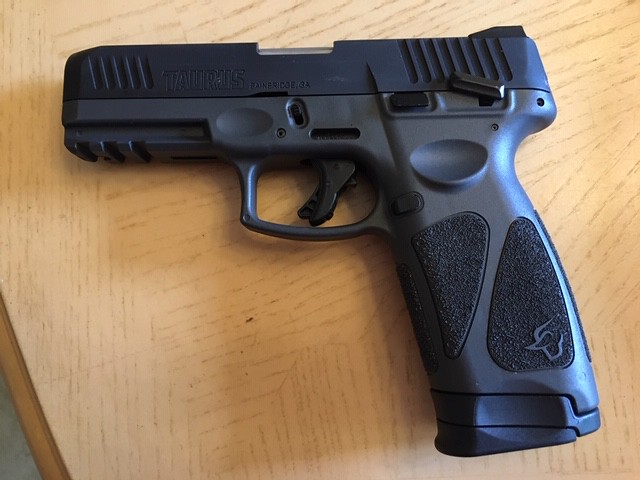 Sights on the G3 are on the smallish side. They are doable but larger would be better. Fortunately you can use Glock night sights as viable replacements. 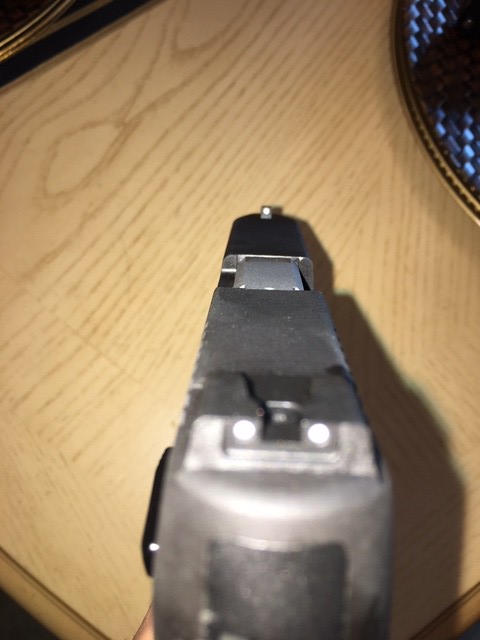 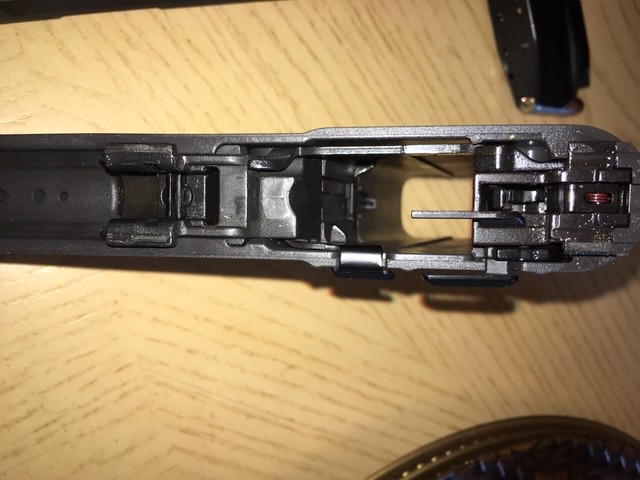 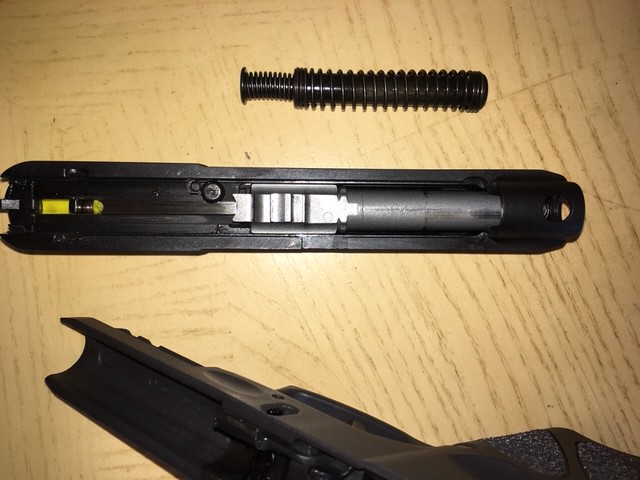 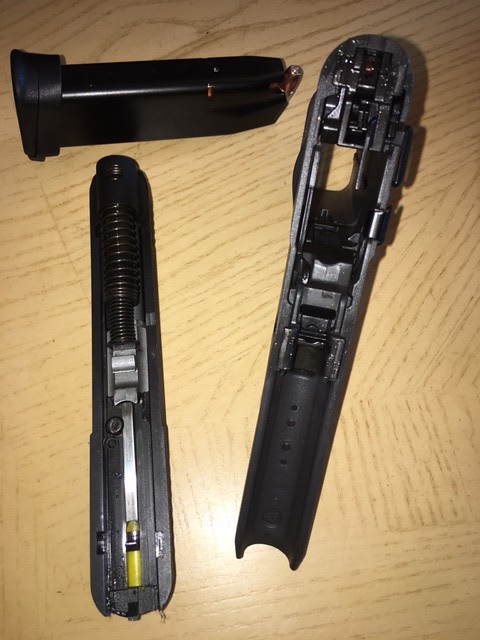 Trigger is definitely 'Glockish'. Some may like it better in that the dingus is wider than on Glock (the dingus pinches the finger for some people after a range session with Glock because it's thinner). This is not a match trigger, but for a SD firearm it's fine. Has a distinctive wall and short reset. For $259 it's gonna be hard to beat imo.
Survival and Emergency Preparedness http://sepboard.us
Top

Dang, that's cheap, I think I need one too.

I've shot a lot of wwb and had many different issues, some even with the actual bullet falling out of the case, so I'd say you're correct and the failures were most likely the ammo
Top

I've shot a lot of wwb and had many different issues, some even with the actual bullet falling out of the case, so I'd say you're correct and the failures were most likely the ammo

Went to an IDPA with a friend a while back and he had a handfull of malfunctions with WWB ammo. Some of the cases you could see where the crimp was f'ed up.
Top

That’s why I’m thinking it was ammo related. Other than that the pistol was a great shooter. And for the price, particularly right now when a lot of folks are trying to double the value of their pistol, it’s a great deal.
Survival and Emergency Preparedness http://sepboard.us
Top
Post Reply
5 posts • Page 1 of 1